The fortnightly news show What A Week will be back after the holidays. If you want to listen to any of our previous shows in the meantime listen on our Mixcloud. To keep up to date throughout the festive period follow us on twitter. Merry Christmas from the Insanity Radio News Team!

Channel 4 has paid tribute to Googlebox star Leon Bernicoff, who has died aged 83, ahead of its Christmas special. 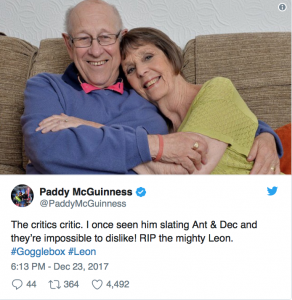