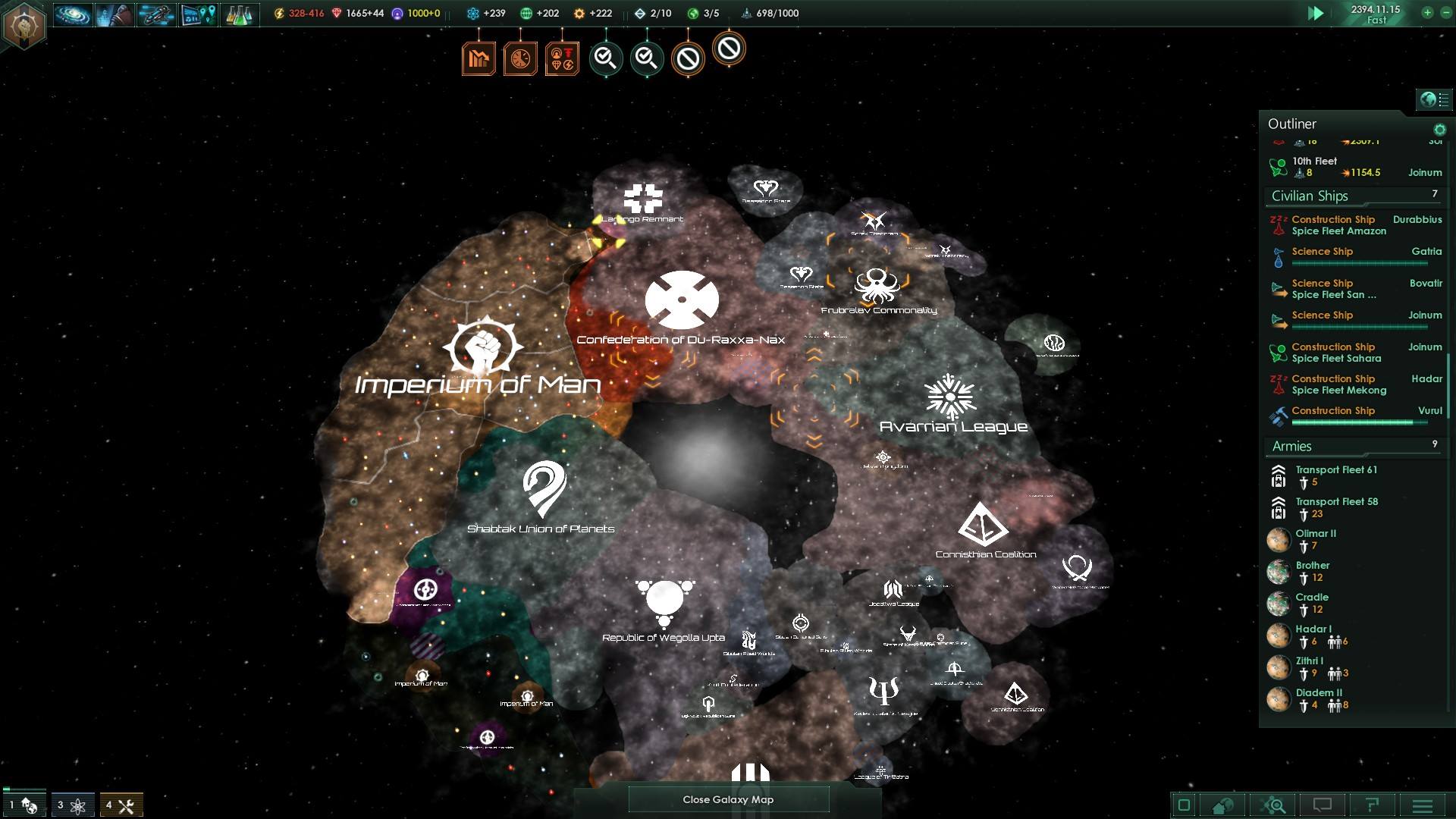 Stellaris is the newest real time strategy game from Paradox Interactive, the same company that have made amazing classics such as Europa Universal and Crusader Kings. Whereas Europa and Crusader kings focused on the earth and the conquest, politics and trade between factions, Stellaris instead takes you on a bizarre and amazing adventure as you build not just a global empire but a empire that spans the length of the galaxy. I will say that the feeling of space is truly immersive but the game suffers from being a bit simpler than other games they have developed.

Like other Paradox Interactive games, there is not so much a linear story but more one you create. At the start of the game you pick your race and its traits, all of which dictate how you react and interact with situations and species. In my first playthrough I played as the ‘Imperium of Man’ with my first leader being Paul Atreides (It was a role play of Warhammer 40k and Dune). As such I started on a desert planet and so I expanded to have a considerable portion of the galaxy with some very fancy and very powerful units able to crush pretty much any faction. However, what is interesting is that at certain points crises can appear – by having a rebellion of AI like Matrix or Dune, or have a quasi Tyranids or Zerg style race invaded and cause all kinds of havoc. What I am interested in is the possibility of new mods being developed as I would like to see a Mass Effect style Mod where instead of having the Tyranids invading instead you have the reapers, perhaps even a full Dune conversion mod.

The mechanics of the game are largely similar to previous Paradox Interactive games but with a different focus. You have three core resources to focus on: energy credits, your basic cash gained by building power plants; minerals for building creation; and influence for political usage. It’s from these resources that you will make trade deals or go to war, since he who controls these resources controls the known universe.

Another feature is the ship combat, in which you build and customise ships to your preference. So for example a you may prefer to build hard hitting slow but powerful battleships but have a nimble Cruiser against certain enemies. Furthermore, you can change and upgrade the weapons in accordance to new technology and development in your resources gathering as in the early game you will often use cheaper easier to mass produce units but with the issue of them causing a major drain on your resource gathering.

Another major feature of Stellaris is that it is an easy to learn, hard to master game, as Stellaris is the simplest of games compared to Europa Universal or Crusader Kings. Perhaps this was a design choice but this make it a clear comparison to Civilisation. The tech tree, the focus on building certain buildings on certain spaces, and the constant political dealings felt more like Civ than any of the other Paradox Interactive games. Perhaps this something that will become less of the case and make Stellaris its own beast over time but at the point of review it somewhat weakness the game as a whole.

The last major feature I will discuss in the technolgy element, the reason I am not going any further is because the game is so vast and deep that it would take at least three pages to attempt to break down. However, my biggest concern for Stellaris is the technology system. In other games, you would have a simple tech tree that would you would need to gain access to certain technology. Instead Stellaris has an odd system where you sort of gamble and guess and pick more in the moment than planning ahead. This does lead to having to pick and choose certain technology over others but this could also mean you could close out certain technology unknowingly. Furthermore, you would not know when this would happen as there is not clear tree but rather a collection of individual choices that don’t work to the games strength.

The sound design, in particular the music for the game, is amazing. The main take away from the sound design for Stellaris is the musical cues, as you have this mixture of music that draws wide inspiration: from Interstellar with the use of organs, to Mass Effect with certain synthesizer usage, even X files seems to get a reference (then again this could be from my interaction and abduction of primitive alien races). This is perhaps one of the biggest strengths for an RTS game like Stellaris as often you are spending hours upon hours building your empire and you want music that helps you forget the minutes as you tick away building that new ship or colonising that new area. As such having such a broad variety of music references helps build that feeling of building a grand space empire, more so than games such as Civilisation. Hearing Battle for Supremacy play as you launch wave after wave in a desperate attempt to hold onto your closest colony or hearing Spatial Lullaby (a track that reminds me of Dune) play while you have a few moments of peace is something that helps build the world of Stellaris and kept me playing for hours at a time.

In conclusion, Stellaris aims to help build a new IP for Paradox Interactive and does an amazing of this, however the flaws with regards to its simplistic design and a rather confusing technology system give it an 8 out of 10.  I would still recommend the game to be played as, although others would compare it to Master of the Orion, Stellaris is its own beast and is something I look forward to keeping an eye on as new updates and developments are made for the game.