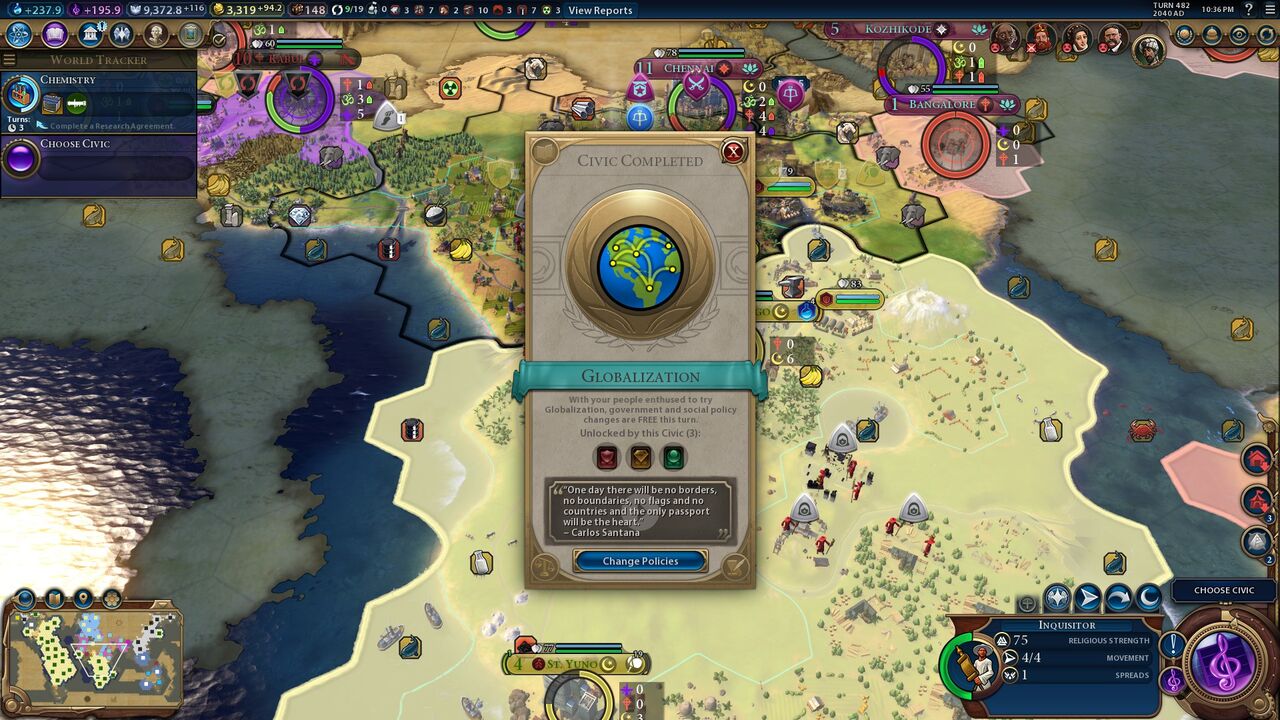 Civilisation 6 is one of games I have had the most fun playing this year largely due to how this game harkens back to previous version of Civilisation, with its loading screen reminding me of Civilisation 4 (my first knowing attempt at the game). To the more cartoonish design from Civilisation Revolution, all this culminates in a more in-depth strategy game and one that Civil fans benefits from it.

In Civilisation 6 there is no real campaign mode. Instead you pick a civilisation with certain buffs and unique units in which you then choose different ways to in win the game. For example, you could play Brazil and focus on building all the monuments and winning a culture victory; perhaps you want a science victory meaning you would win the space races. You can even play as the aggressive and war-like India, leading to a completely nuclear devastation of the world. As such the game does not have traditional story in that sense, but the game allows for you to create your own narrative each time you play.

There have been a number of changes to the Civilisation formula over the years but Civilisation 6 must have been an entry in the franchise with the greatest of amount of changes under the hood. As there is a myriad of changes, such as Casus Belli being needed to legitimise war, the various city developments, even the formations of units are entirely different. Wereas Civilisation 5 felt it borrowed heavily from Civilisation 4, this does not to seem to be the case. A key example can be found in how cities are developed. In Civilisation 5 you would build certain improvements that would give you certain resources that would buff or allow you develop certain units. In Civilisation 6 instead, you would have to think ahead about how you develop, not just your empire, but your individual cities. For example, you may have a city that is on the border to a rival empire so you would have to make it a massive military keystone, and as such you would develop encampments to help defend your city. However, you would need to ensure trade is following through and so you would need to build trades, and a city that is next to several important resources would prioritise commercial and entertainment centres. Leading to harbours, more encampments, more wonders, more defense etc. There is natural progress and response to how the situation responds, however my biggest critique of the game is how anti-war the game can be, but how aggressive the barbarian and AI can be. Perhaps this is due the fact that many of my AI had agendas (certain traits that dictate the AI’s response) that were focused on war, but I even tested this on a lower setting and still found myself unknowingly overwhelmed by how aggressive the AI was and had to fight many a bloody battle to push them back. Nevertheless, upon winning this war I was constantly denounced and constantly ashamed. Perhaps this a known choice stopping people from just focusing on a military victory, which was a common concern among players in Civilisation 5. This makes some sense but would seem odd on my part that I am being considered a massive threat by everyone for fighting a defensive war.

I will say that the sound design in this game is amazing, this mostly comes from the amazing soundtrack that Geoff Knorr does an amazing job with. With the opening being almost as iconic to the Civilisation 4 opening, to the little touches such as the slight changes in the different faction’s music as the ages progress. My personal favourite being the Arabian Atomic era, as it felt drenched in cold war paranoia of an enemy at every turn and the world turning on its axis. This music truly feels fitting for Civilisation 6 and shows how amazing Civilisation 6 is compared to Civilisation 5.

In conclusion, at this current moment in time I can find no major faults with Civilisation 6 and as such I would considered it worth of a ten out of ten. Seeing as the mechanics add great depth to the game, a more challenging approach meaning that you would have different options each time you play the game as one of the many factions. It is truly worth of being on every player’s wish-list.