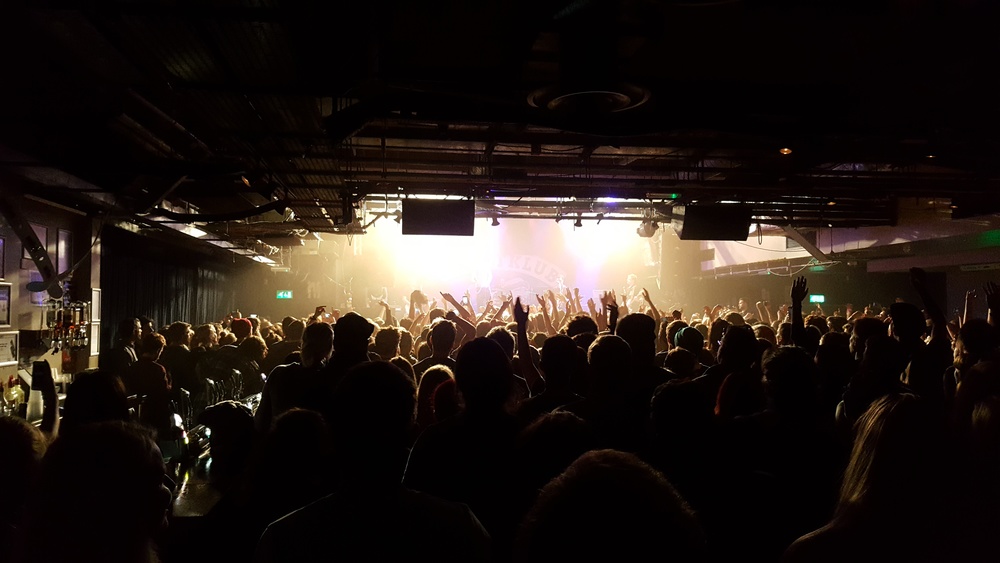 It would be wrong of me to say that I was excited to see them. Truth be told, I didn’t know that much about KraftKlub apart from the fact that they were German. What else is there to say really?

So who are KraftKlub?

KraftKlub are a German Rock/Indie band that also integrates some aspects of rap into their music! They are very popular in Germany, but despite this, are unknown unless you play FIFA 13.

My housemate seemed to think that I would enjoy it. I wasn’t so sure. I was clearly the sceptic among the party of three that were representing Egham. My housemate joked that it would be hilarious if they had tried to speak English, and to be fair to them, they gave it a good go. They played to their audience and it worked. Really well.

I first heard some of KraftKlub’s music when I played FIFA 13. Whilst listening to them, it gave me a bit of a tast of what to expect. However, versions that I had heard seemed a bit tepid. Kinda like a German kid’s apple strudel (geddit? because it’s a joke…no..?). What needs to be understood is that I didn’t think that I would like them. Not one iota. I would give them a chance, but I predicted that I wouldn’t like them.

How wrong I was.

I LOVED THEM. I really enjoyed the atmosphere inside the o2 Academy during KraftKlub’s set. True to the stereotypes of German efficiency, they started on the dot of 9pm. People always say that hearing a band live is infinitely better than hearing them on a CD or MP3 file. I finally understand why that is. Their energy and their enthusiasm was addictive and it filtered through to the audience. What started out at the beginning as being a ‘ohh I know that song’ turned into a ‘I don’t know this song and I don’t understand this song…but I love it!’ This is what made KraftKlub so great though. Most of the audience were German so they were really into it but it didn’t mean that others could be into or get into that sort of music. It was accessible. It reminded me of how the UK welcomed the likes of Psy, Rammstein, Robin Schulz and Alligatoah as ‘mainstream’ musicians. Sure all of the examples I’ve mentioned are quire niche, but in a way, so is KraftKlub in how they presented themselves.

From what I could tell (my German isn’t really that good), they played two songs which I recognised. One of them Was Eure Madchen and Schusse in die Luft. Not sure what they mean, but I know that they’re really good. After that, I lose them a bit. The odd translation came about but apparently KraftKlub are my new favourite band [Lieblingsband] (they played that one). Also, apparently I don’t want to go to Berlin [Ich will nicht nach Berlin].

I initially thought that I wouldn’t get into KraftKlub and it would be a bit of a miserable night for me. But I was wrong, very wrong. Despite having deadlines which I needed to meet, I couldn’t help but get into the spirit of it all. They were full of energy and they were awesome value for the money that I paid to see them.