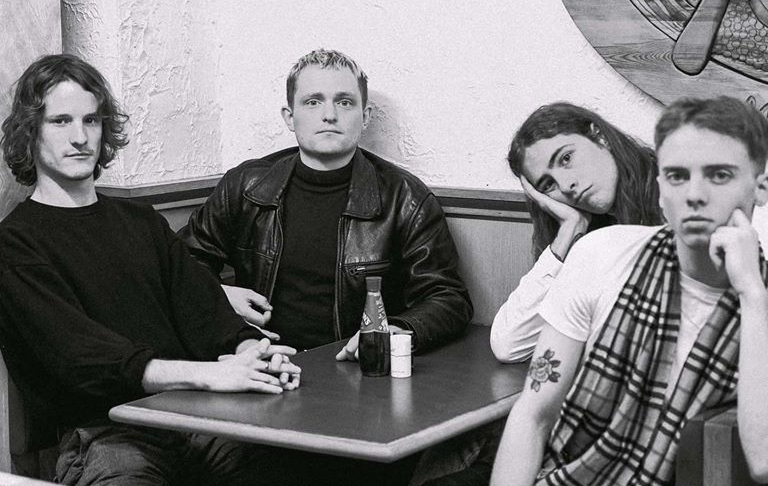 Guru rarely provide comfort to any poor soul by telling them they’re in the right place. Being assaulted by snarls and crashes (and other gig-goers) is rarely where anyone wants to be on a Friday evening. But yet, you feel this is where you need to be – bruised and sweaty on the floor of an overcapacity club. This is where I was, returned to the Old Blue Last for the Brighton based 4-piece that specialises in angry, loud and demanding punk. Despite my misgivings about the small venue for a quieter, more calculated group, the Old Blue is perfect for power and wildness – lucky for me that this is exactly what Guru bring to the table.

The journey to Shoreditch was not, this week, filled with thoughts about potential disappointments, line-up changes and how to stay dry. Yes, it was raining once again, and yes, Guru were saying goodbye to drummer Simon after tonight. But there was never going to be any doubt about their quality. The personalities of Tom, Kieran, Fergus and Simon complement the restlessness of their crowd to provide only one thing – chaos. Fuelled by a barbed, thrashing instrumental, frontman Tom struts around the stage in a white vest, his movements a drop of the shoulder that sends us one way whilst he turns the other with angry, biting commentary.

I have in the past felt the need to comment on support acts but such was the strength of Guru on the night that I had all but forgotten who occupied their space before. Treated to the crashing thunder of Simon’s last time on the kit, their new single tracks ‘Don’t Talk’ and ‘LTD’ exhibited a lyrical patter and rhythmic simplicity reminiscent of Slaves. It was the older tracks that stole the show, however. ‘Consumer Helpline’, their first single, brought out the best of Tom’s theatrics, and ‘Suntrap’ sent the crowd into a frenzy. What I mean to say, however, is that it sent me into a frenzy.

I probably wasn’t the prettiest sight on this night, chaotically throwing myself around a tiny venue, but I began to feel, at some moments, that this is what music is about. Forget your melodies and your ballads, all you need is to throw yourself into the crowd and bounce off people at high-speed. For many, this is exactly why they get themselves down to tiny venues on wet and windy nights. Music, in the sense of Guru, is a communal activity. So sure, no one really wants to be here. But to enjoy Guru to the fullest extent, this is where you need to be.