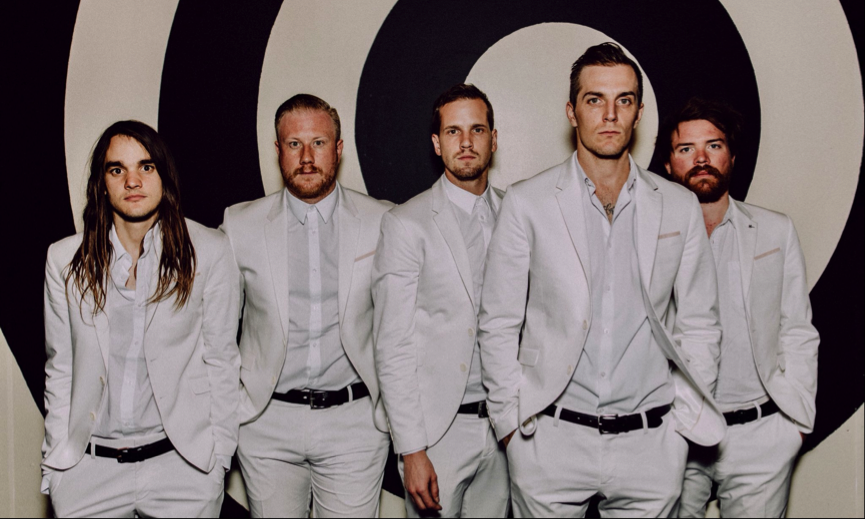 The Maine illuminated the O2 Forum in Kentish Town on February 29th for their UK/Europe leg of their You Are OK Tour. Playing to an almost full-house of passionate fans, this set spread the message of self-love and healing.

Starting the night was Sun Arcana, a four-piece band from Essex and London, who energised the crowd with an early hit, “Let Me Down (Ventilate)”, then continued to play recently-released songs “Sleep Talking” and “Hard To Be Around”. Following them were the Australian pop-punkers, Stand Atlantic, who proved to be a crowd favourite. The female-fronted band played their popular hits “Chemicals” and “Coffee at Midnight”, and newly released singles “Shh!” and “Hate Me (Sometimes)”. They surprised the London crowd with a performance of a not-yet released single, which proved to be a sensation.

The Maine, from Arizona, USA, opened their set with a video of an emotive spoken word poem about feeling lost, alone, and broken. It segues into the opening hit “Slip the Noose” with the crowd passionately singing the opening lines back to the band. Crowd favourites, “Inside of You” and “Black Butterflies and Deja Vu”, kept the crowd energised and excited. Although there were slight technical difficulties, John O’Callaghan, the lead vocalist, still exceeded expectations even with the help of the crowd masking the problems with dedicated singing. The band was also missing drummer, Patrick Kirch, who became a father to a baby girl this morning, however Andrew Stravers, from Katastro, delivered an impressive performance in his place.

O’Callaghan kept the crowd on their toes, crowd-surfing during “Bad Behavior”, and starting an impromptu crowd sing-a-long of popular hits “Mr. Brightside”, “All Star”, and “Wonderwall”. A dream came true when O’Callaghan called on a fan, who sang “(Un)Lost” for him whilst waiting in line earlier, to perform the song for the audience. Jokes and an amusing metal impression were scattered throughout the gig.

The theme of the gig was clear. The setlist and visuals coincide with their recently released album “You are OK”. Messages of self-worth and love were constantly present throughout their set. O’Callaghan regularly asked if the crowd was alright and reminded the crowd about love and that life is worth living. After the upbeat performance of “Numb Without You” and a beautiful performance of “Flowers on the Grave”, the night ended with another poem by O’Callaghan. However, the sombre tones of the earlier poem was transformed into a positive and empowering piece of hope and healing.