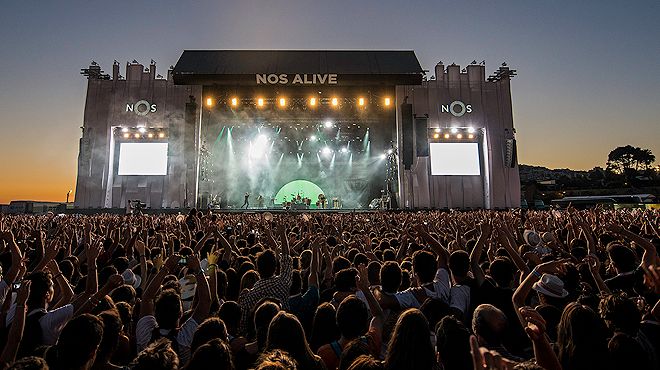 From the 7th – 9th July 2016, the music and arts festival NOS Alive in Lisbon, Portugal, celebrated its 10-year anniversary. With the beautiful weather and location, the festival has grown considerably over those 10 years, evolving into an event popular not just within Portugal but across Europe and the world. It now attracts both local and international visitors, as well as widely spread big and upcoming artists from a variety of musical genres. Having been fortunate enough to attend the festival this year, I had the opportunity to see headliners including Radiohead, The Chemical Brothers and Arcade Fire as well as other big names from a range of genres, such as; The 1975, Years and Years, Biffy Clyro, Two Door Cinema Club, Band of Horses, M83, Wolf Alice, Tame Impala, Foals, Pixies and Grimes. The list is endless and it was awesome!

As it was my first festival ever, I was a little anxious at the prospect of going to one abroad instead of remaining within the UK. However, following the three days I can confirm that the festival combined everything that I love about music in an environment that was both safe and organized but also just the greatest fun! From the moment you arrived following the 4pm opening, whether by car, train or bus from the local campsite, there was live music as well as people handing out lanyards and colorful cowboy hats, ready to greet you. Entering the festival area with the sea on one side and beautiful cultural landmarks on the other, it was evident that the light-up sign along the edge that said, “The Dream is Real” could not have been more accurate. From there, the music, starting officially at about 6pm on one of the three main stages (NOS, Heineken and Clubbing), continued non-stop through to the next morning’s sunrise.

With a line up that continues to get better every year, it was hard to pick just a few stand out performances. The Chemicals Brothers however, packed the main NOS stage, with the entire crowd hanging onto every beat of the intense bass, enjoying their endless drop teasing. The incredible light show and addition of two giant robots also helped to create an atmosphere of communal excitement. Two Door Cinema Club, who were very well received on the Heineken stage, also deserve a mention and were a personal favourite, with their ceaseless collection of indie rock hits that got the entire crowd jumping and dancing. It was this feeling of celebration and enjoyment that was evident in each crowd across the course of the festival and what really made the few days. With the range in age of the audiences, from the most adorable 6 year olds all the way up to seasoned festival veterans, the collections of friends and families were open, enthusiastic and respectful. Evident particularly, in the mosh pits of Foals and Biffy Clyro, the voluntary nakedness for the big screens during Tame Impala and the presenting of a bra to Father John Misty! As well as, of course, the non-stop insane dance moves throughout the nights.

The festival was also home to many independent food stands serving a range of items ranging from wraps to burgers, pasta, pizza, and churros. The bars set up around the arena also sold endless Heineken beer along with a mix of many other drinks and I feel the need to mention that the bathrooms were also surprisingly adequate! Overall, I have only positive things to say about my experience at NOS Alive 2016! With a capacity of only about 55,000, the festival combined the joys of being a part of an amazingly excited crowd whilst maintaining a community feel and intimacy with the artists. The line up speaks for itself and I know the festival will only continue to grow from here based on its past success. If you are at all interested in exploring alternatives to just UK festivals, NOS Alive is one of the firsts you should consider!