On Thursday 8 March the news team will be back will a follow up on the UCU strikes. If you missed our episode on the strikes last month then you can catch up on our Mixcloud. You can also hear other episodes and podcasts so give it a listen! To get daily news updates, follow us on twitter.

Brexit: Theresa May urges EU to buy into ‘ambitious’ vision.

Florida high school re-opens after one of the worst mass shootings in the US. 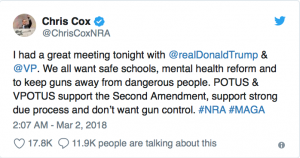