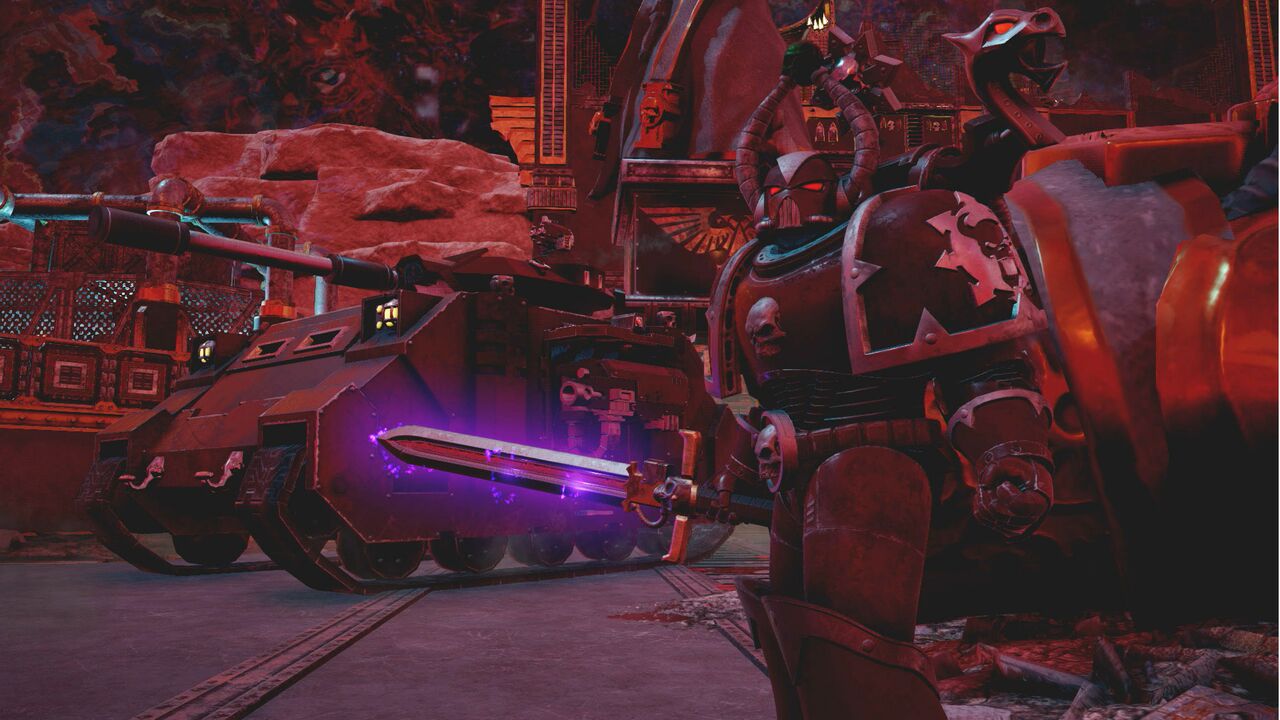 Ever since THQ collapsed the Warhammer 40k licence has been used by several companies with some games making amazing entires, such as Battlefleet Gothic, and some making somewhat less than stellar games, such as Warhammer 40,000: Storm of Vengeance, which was so panned that it was removed from purchase on the Steam Store. Nevertheless, with Eternal Crusade, I am somewhat conflicted about it, hence why I took another month to try and fully immerses myself in the game, as the game when initial discussed was meant to the Warhammer answer to World of Warcraft. However, as development was changed and new heads were put in charge, the game evolved and changed. It would be less of an MMO and more of a multiplayer game with MMO elements (akin to Planetside 2), to which the game succeeds as it takes the style of combat as was used by Warhammer: Space Marine and polishes it to some level and adds tank elements. Despite all this the game never quite lives up to my expectation.

Something of a shame for a Warhammer 40k game is the somewhat lack of a story, this in part due to the MMO elements the game’s story is ever changing and so even given the extra month I can’t say exactly what the story is. What can be understood is that, the four main factions of the 40k universe Space Marines representing the Imperium of Man, Chaos Space Marines represent Chaos, Orkz and Eldar each fight for control of the planet. What this translates into is that each of the different multiplayer battles have an aggerated effect on the world. This I believe is something borrowed from the Tabletop game it is inspired from and so it feels somewhat fitting that this implemented.

The mechanics of the game take heavily from Space Marine and to the point it succeeds but it adds certain elements I do not approve of, such as micro-transaction which pay for cosmetic upgrades but for a Warhammer game, customising your units is as important as the story. As with the Tabletop game you would take your time painting and making up silly stories as to why your units are Space Canadians or why your Chaos Space Marine likes the colour pink on everything but his left horn etc. So, while the game does help levy the issue by allowing you access to all the units at launch and from buying the game as well giving you some customise options, it feels like something of a missed opportunity.

In the 40k universe, everything is Gothic, over the top and meaty for a lack of better word. This is very much the case and perhaps one of the games more strongest elements at times. Bolters feel like heavy powerful guns, more like the rapid-fire RPG that is than the machine gun copy that people perceive them to be. However, Rhino’s, those most infernal of metal boxes, feel somewhat weird as they make a huge amount of sound and raw energy but can sometimes run over 7 to 8 foot men in huge armour without a major nose to be had. It’s these differences that play to the game’s weakness and why I am so lackluster to the game.

In conclusion, this game is pretty much designed for something you and your friends play every now and then and not something to be played constantly. Either from the confused sound design, the bizarre Micro-Transactions, or even how boring the game flat out is due to the lack of lore in a 40k game. I am rather sad but I must give this game a 6 out of 10; it is something of miss chanced but could be improved as the game is being updated constantly.