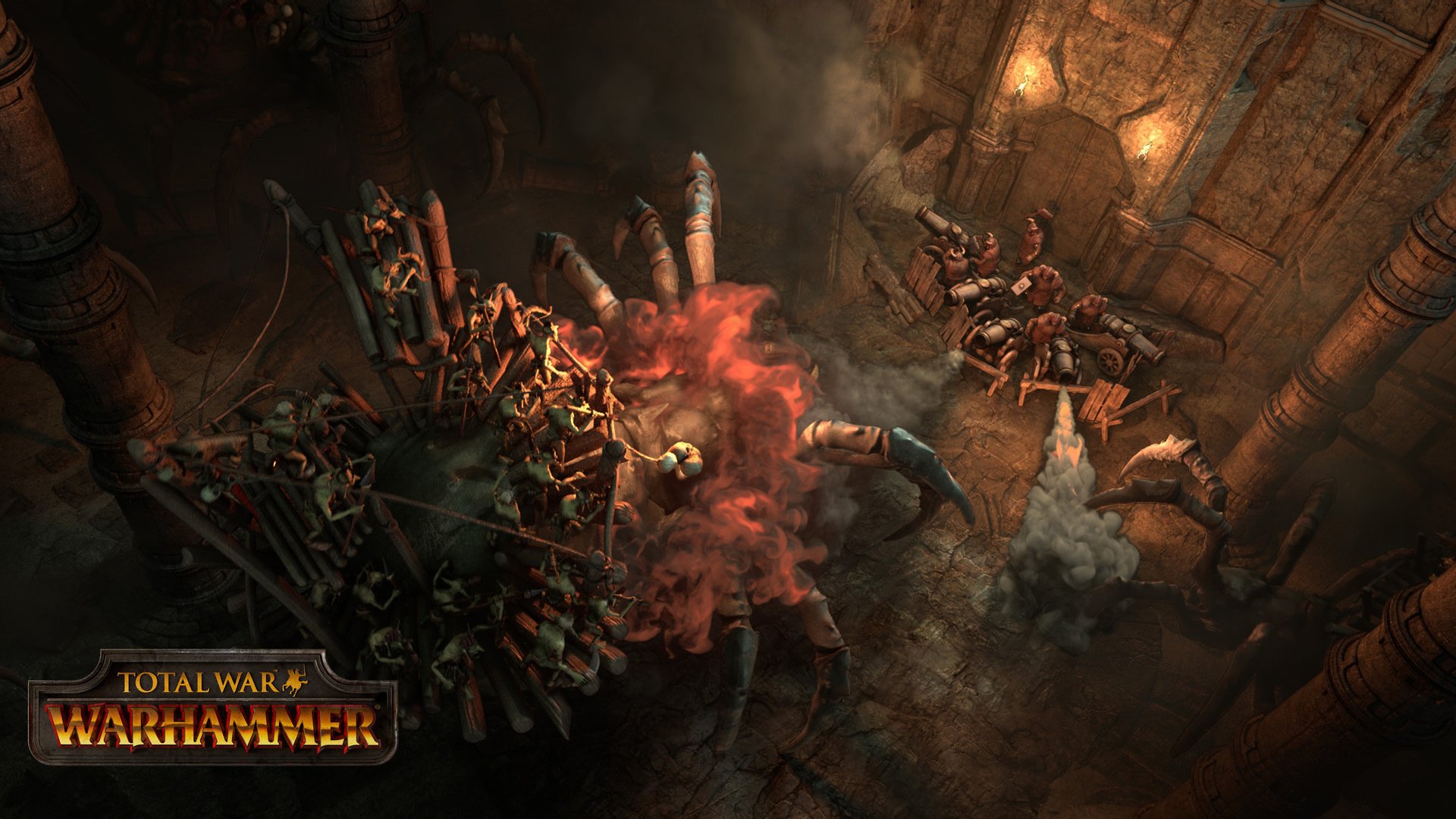 Total War: Warhammer is the biggest and most ambitious game in the Total War franchise from developers Creative Assembly. Instead of focusing on a specific historical era such as Ancient Rome(Rome 1 and 2 Total War) or the 18th century (Empire Total War) it instead focus on adapting the table top game Warhammer Fantasy. Perhaps what the most interesting thing about this attempt is how well Creative Assembly have succeed in this transition away from historical events and on a fantasy approach. What is even more surprising is that Total War: Warhammer has allowed the team to loosen any previous chains of trying to keep the game realistic and instead creating factions that are all unique and separate to each other but draw inspiration from the lore and from various eras and playstyles that have developed over the years. This is something I will go into greater detail in the story element in which I will discuss the setting and the different factions in play.

Total War: Warhammer draws upon the Warhammer fantasy lore which had been going on for about 32 years until its recent controversial reboot. This relates to the game as it is implied to take place in the last era that occurred in the Warhammer Fantasy universe, ‘the end times’: a point where powers of Chaos (the ultimate bad guys) basically reset the universe. What this means in game is that, if you play as Chaos you function much like Attila the Hun in Total War: Attila in which you just burn and raze any settlement you can find. This makes the empire the ultimate ‘good guys’ and dwarfs a natural ally with the Undead focusing more on an internal conflict and being something that functions like a plague. The orcs are also a constant threat and help you learn and develop tactics ready to deal with the eventual arrival of the Chaotic forces. As such you have this interesting mix of units, as the empire (the main human faction) have elements of Empire Total War by having a mix of gunpowder units but also having billmen and later steam tanks to help offset against the heavy cavalry of the Chaotic forces. As such they will often inspire tactics to keep the enemy away from you until your cavalry come in and smash into the enemy. In this game, the Undead faction do not have any morale and as such they will not retreat in a battle, this is however balanced by the fact that they will drop like flies the moment they are flanked meaning often the best tactics is to get close and pin units as you unleash mobs of units to deal damage and break their morale. The other major tactic style is that of the Dwavern faction who are the most fun to play as they have a high defensive stat and it is often best to just dig in at a high point and let the enemy come to you after you have pounded them with several artillery bombardments, significantly weakening their morale and units.

There is one major thing to take away from Total War: Warhammer in terms of mechanics, other than the game having made sure each faction is unique to each other, it is the simplified and easier to manage overlord system. Taking inspiration from Total War: Attila, this game has focused more on allowing you to allocate units and heroes’ skill trees in a way that is far simpler than the methods of Rome 2 or even Attila. It shows that the team at Creative Assembly have really focused on creating a polished game as now I can build units with ease, understand the strengths of them and know how to use them without having to look up a guide on what the negative effects of not employing a witch hunter for example.
The other major mechanic is the way that the team has weaved in the importance of civic peacekeeping and the threat of Chaos and the Undead in a way that seems natural, as instead of having to deal with the one type of unrest you have to deal with several factors. Often this comes in the form of Undead or Chaotic influences who seep into your land twisting and deforming the land and possibly making it hostile for you walk though, added onto the usual high tax rate and other normal effects. For example, what could happen if you let the Undead or Chaos influence get too high you may have a Chaotic rebellion and with it Chaos forces in the middle of your empire.

The sound designers have done an amazing job to ensure that each faction is specific and unique to the audio given to them. The sound design is something I love about this game, although I have yet to find tracks that have made me want to play on my phone as I commute (such as the Duke of Death from Medieval 2 or Warriors Chant from Rome Total War). The grandness of the game is amazingly reflected in the musical themes, through the main menu and making you feel in game that this is a grand, dark fantasy world. Even the smallest things, such as playing as Chaos and choosing you war corndates, reflect this and hearing your allies shouting “skull for the skull throne” or “blood for the blood god” in a glorious choir made me chuckle. Hearing the clashing of sword and steel in combat, the stomps of giants and trolls, and the mounted beasts riding into battle are moments that make you feel that this is a true Total War game. The soundtrack gives you the true feeling of being in (for a lack of better words) a total war, where at any moment the silence could be broken by a volley of demonic cannon fire or an army of spider riding goblins and then hearing the volley land or the spiders clatter across the ground. Sound design has always been a strong suit for Creative Assembly but they have truly outdone themselves, however the lack of iconic music is perhaps the only part I am somewhat disappointed with.

Total War: Warhammer has done an almost impossibly task, creating a believably meaty dark adaption of the Warhammer Fantasy universe. Although its music is fitting it has not created any iconic tracks but this is possibly its only downfall. What I would like and am hopeful for is new expansion packs that add new races such as the elves, the lizardmen or, my personal favourite, the tomb kings. Nevertheless the games currently released give it a solid foundation, which gives me hope for future release from the Total War franchise.