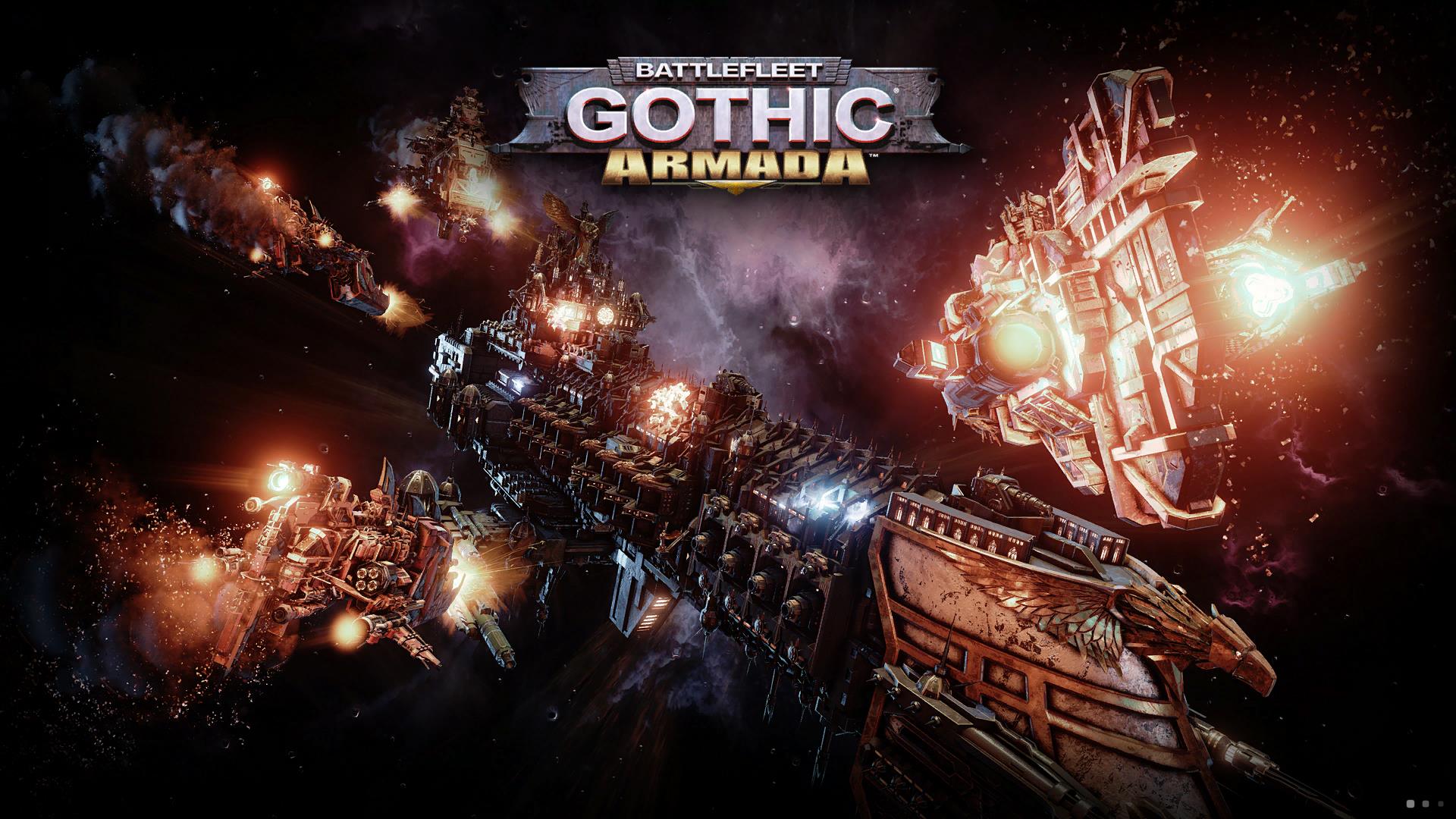 Warhammer 40k video games have been much like the lore in the franchise: troubled, turbulent but amazingly deep to learn about. Many would argue it was not until the Dawn of War 1 that Warhammer truly showed its full potential, with amazing sound design – a humanising element to the most inhuman members of the Imperium of Man and the Space Marine. This began the Warhammer 40k video game franchise’s great crusade: with the subsequent expansion and sequels to Dawn of War it showed the great lore and gore style of the table top game. However, following the collapse of THQ leading to the franchise’s own Horus Hersey: the rights to Gameswork shop IP were no longer as strictly held by Relic with nearly all manner of games being made. Some were somewhat bad clones of their games, and others give hope to new ideas that can help expand the lore and potential of the franchise. Battlefleet Gothic: Armada, I am proud to say, is one of the best games to come out from the Warhammer 40k franchise post-THQ and, given enough time and possibly expansion and squeals, it can perhaps become one of the best games of its type and class. The game focuses on a rather overlooked element of the tabletop games but an important one to the lore: the imperial navy. Furthermore, I have had limited experience with space real time strategy games (RTS), with my main experience being from Homeworld and Star Wars: Empire at War as the market for space RTS is somewhat niche and I have often focused on the land side of RTS games and never really cared for space RTS due to the fact it felt weird and required a different style of thinking. However, from playing Battlefleet Gothic: Armada I have a renewed interest in trying and playing new space RTS games if they are done in a way that is somewhat similar to this game.

The story of the game is one of the most fascinating elements as it takes inspiration from the old Battlefleet boardgame. In the game you take command of Admiral Spire, a newly promoted captain who fights to protect the gothic sector from one of the biggest villains of the Warhammer 40k universe, Abbadon the despoiler, as well as Eldar and Ork pirates. The events of the game take place in the lore in the Gothic Sector during the twelfth black crusade. What the game does well is its usage of painting like cutscenes and dialogue between and during missions, building the feeling of a true Warhammer game – nothing feels truly like a Warhammer game until you hear the Orks screaming ‘WARRGGH’ or the tainted foul legionaries attempting to sway you to chaos. I will not go too into depth on the story as it one that should be experienced in its full way and largely dependent on your skill as an admiral and your ability to think and act flexibly.

This game’s ability to make ships feel as big and weighty as they appear is done amazingly so in the Unreal engine 4. This is further supported by the importance of micro management, in which you have to quickly respond to a situation and focus on a ship at a given time. This is helped by the game making sure you balance your ships with a points allocation system as the higher the class the ship they less you can deploy. However, the issue with this idea is that for relative newcomers it requires a certain learning curve. As past RTS tactics such as turtling in which you hold a portion of the map will not work in this game you have to think differently to how you would assume a land RTS match would work. Nevertheless, the game rarely gives you a ‘game over’ screen, instead adapting to your failings and as such the game becomes harder and harder – due to your inability as an admiral, you are to the blame for the game ramping up which I love. This may detract people but this fits well into the Warhammer universe, of the desperation of imperium of man, of always being at war: in which any battle could be the one that leads to your downfall.

The other main feature of the game is the ship to ship combat, with each race having a certain focus on a certain skill – Eldar ships focusing on speed, Orks focusing on close ranger combat and Imperium of Man and Chaos ships focusing on ranged combat. Each require a different way to approach the game with different tactics. For example, you would want to avoid ramming Ork ships if you’re playing as Chaos but you also want to avoid chancing Eldar ships since they can cut away your defences with speed and swiftness. How this plays out in the game world is that you will often have certain abilities, such as speeding up your ship, launching torpedos or choosing which side to focus your attacks on, which require you to focus on micro management to ensure you able to win the battle using tactical intelligence. Again, this may prove to something of a learning curve to new players but this is rather easy as the main campaign teaches you the basics of ship to ship combat.

The last major mechanic I will discuss is the customisation of the fleets, as each fleet changes depending on how you use it and how you level up. For example, you may want one light cruiser as your scanner and bait with another cruiser being your tank, meaning that you may want to attach torpedoes to disable enemy engines or elements in their ship. Perhaps the only major flaw is that you cannot paint and mod new colours and logos, as with the Dawn of War franchise, and it would be nice to possibly introduce something like this or allow for a mod kit. It would be amazing to see new races being added, such as the Necrons who could be this slow tank style race or the sister of battle whose love of flame based weapons means they could be faster than the average imperial ship but still prefer to close in to combat with flame based weapons. It would be interesting to hear new factions being introduced with future expansions or sequels since it would be a shame to end this brave new step in Warhammer games.

The sound design in the game is something that worthy of being mentioned, even though the music is largely limited. Despite seemingly limited resources, Tindalos Interactive do an amazing job in building the style of score that is fitting for the Warhammer 40k. A mix of choir but dread, sort of classical but with more fear built in. It may not be as memorable as the Dawn of War soundtracks, with industry legends such as Jeremy Soule  and Inon Zur, nevertheless, I have great expectation that with a greater budget the game could create an even greater musical score.

The last major point I would like to discuss is the actual sounds in the game, as the voice work helps build that feeling of Warhammer 40k. Hearing the Ork ship horn bellow as it prepares to ram for you, hearing your ships fire its broadside rounds, and hearing other ships explode helps create a meaty impactful sound which perfectly fits the grim darkness of the Warhammer 40k universe.

In conclusion, Battlefleet Gothic: Armada stands as a beacon of light in Warhammer 40k games’ current bleak future: even though Dawn of War 3 was recently announced, we have yet to receive any clear idea what kind of game it will be. Nevertheless, I look forward to future content for Battlefleet Gothic, perhaps the addition of new factions such as the Necrons would be interesting to change the balance and style of the game. Something I would love is finding a way to have space and land battles on a grand scale, perhaps working with Relic to blend Dawn of War 3 land combat with the grand space combat of Battlefleet Gothic. However, the minor but rather telling issues of the game are something that can be improved upon with more experience and as such I look forward to future entries in the Battlefleet Gothic franchise.