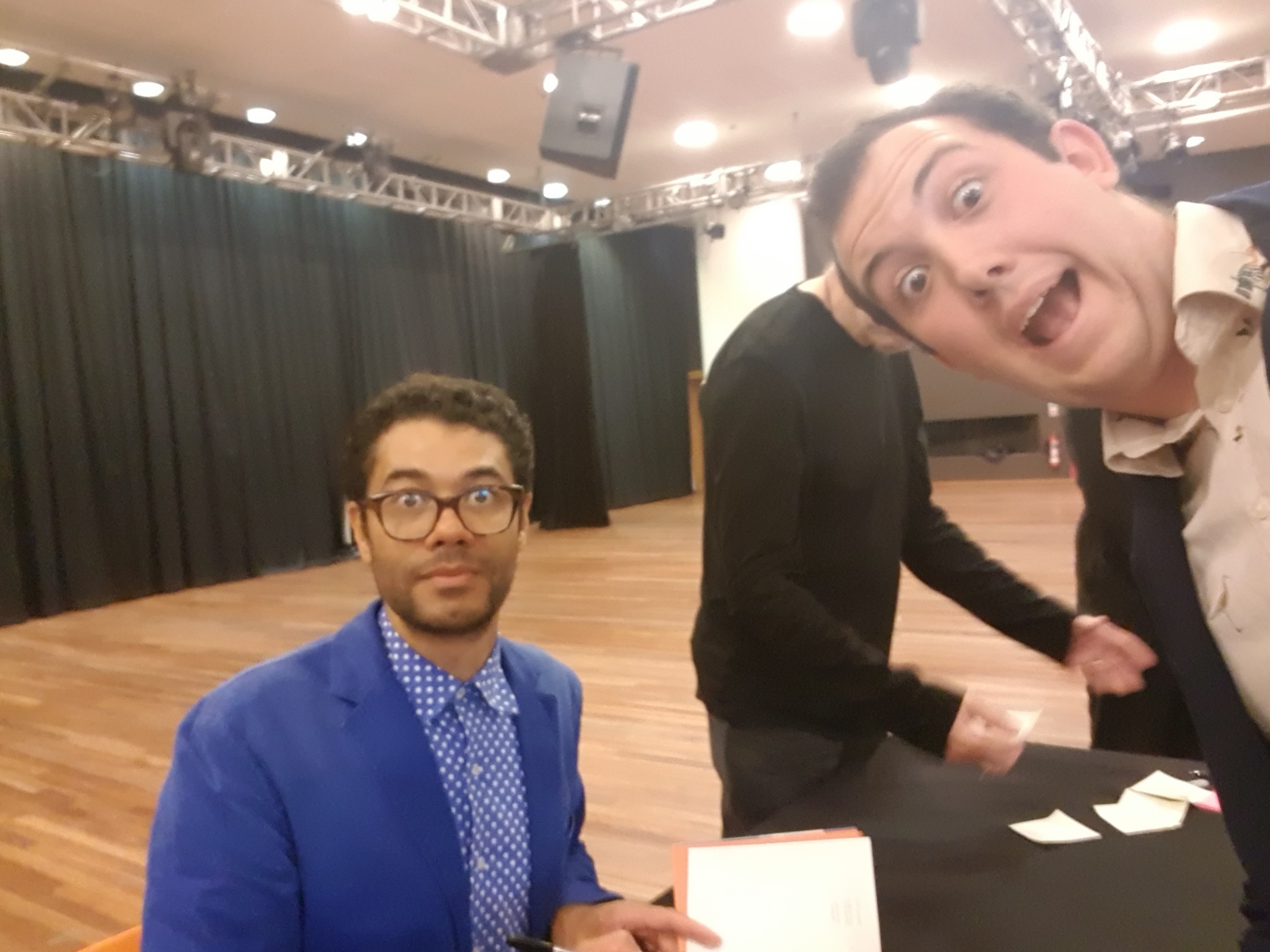 “Nothing that can hatch belongs in your vagina”: Reviewing Ayoade on Top

Usually when people write reviews, its customary for them to a) know exactly what they’re reviewing, and b) have read/watched/listened to what they’re reviewing before they review it. Here though, you find me breaking both conventions. About two weeks ago I had the sheer pleasure of watching Richard Ayoade (The IT Crowd, The Mighty Boosh, Garth Marenghi’s Dark Place) in conversation with Adam Buxton (Hot Fuzz, Stardust, Son of Rambow) where he both plugged his book and reflected on his career. I was intending to review and comment on what I saw in that performance, but so compelled was I to get his book, that now having read (admittedly, only some of) it, it would be wrong not to talk about it. What follows then, is some sort of amalgamation between what he said in conversation and my observations having started to make my way through his book.

Both the book and the evening have a focus on one central theme – Ayoade’s opinion that the 2003 film View from the Top should be considered a cinematic masterpiece. The film follows the story of a small-town girl called Donna, played by Gwyneth Paltrow, who can’t wait to get out of her hometown and becomes a flight attendant to travel and make money. What Ayoade has written is essentially a critical appreciation of the film which he suggests is remarkable for a number of reasons;

He argues his case passionately and with exceptional eloquence – both in the writing in his book, and his discussion with Buxton. Ayoade says that no one made this film and thought “this is the last film I will make”, What’s so interesting and amusing about Ayoade on Top is that it looks at the film as if they intended it to be a work of art, as if director Bruno Barreto (One Tough Cop) intended it to be his magnum opus. He analyses the opening sequence at length; he draws deeper meaning from the ropey acting, the continuity errors and the implausibility of it all. When questioned on it in person, he advocates it with the awkward style that is synonymous with the “Ayoade multiverse”. As Buxton highlights, this book is also peppered with snippets of memoire – well… slightly fictionalised memoire maybe. Recalling the lawsuit against Paltrow’s company, Goop, about making unscientific claims against vaginal eggs, he recalls his mother’s wisdom:

“As my mother would always say to me, nothing that can hatch belongs in your vagina”.

And that, to me, illustrates the whole purpose of his book. It is a two-hundred-and-nineteen-page joke. Perhaps Ayoade is mocking rubbish cinema in general, perhaps he is mocking Bruno Barreto’s films, perhaps he is mocking some capitalistic desire to lap up whatever comes our way if it has pretty people in it. Whatever his ultimate aim may have been, he is sidesplittingly funny in his execution.

This is highlighted in the start of the evening where Buxton comments on Ayoade’s hectic schedule. He has already done two interviews today where he apparently “failed to promote the book”. He says that in the first interview he managed to accidentally promote National Socialism by commenting on the Journey song Don’t Stop Believin’, featured in View from the Top’s soundtrack and which gets its own unpicking in his book:

“Don’t Stop Believin’ expects us to persist with our current belief. As regards what we should believe, the song is silent. Journey don’t care who we are; we could be Satanists as long as we’re consistent.”

Ultimately, his way to pull off his joke is to subvert the method of criticism. He takes his persona and manner, says both him and his opinions should be avoided at all costs, and then proceeds to plaster himself and his opinion all over the book. It is hilarious, eloquent and intelligent beyond belief.

If you’re a fan of humour that is damned clever but also entirely ridiculous then I can offer you but one piece of advice: buy the book.