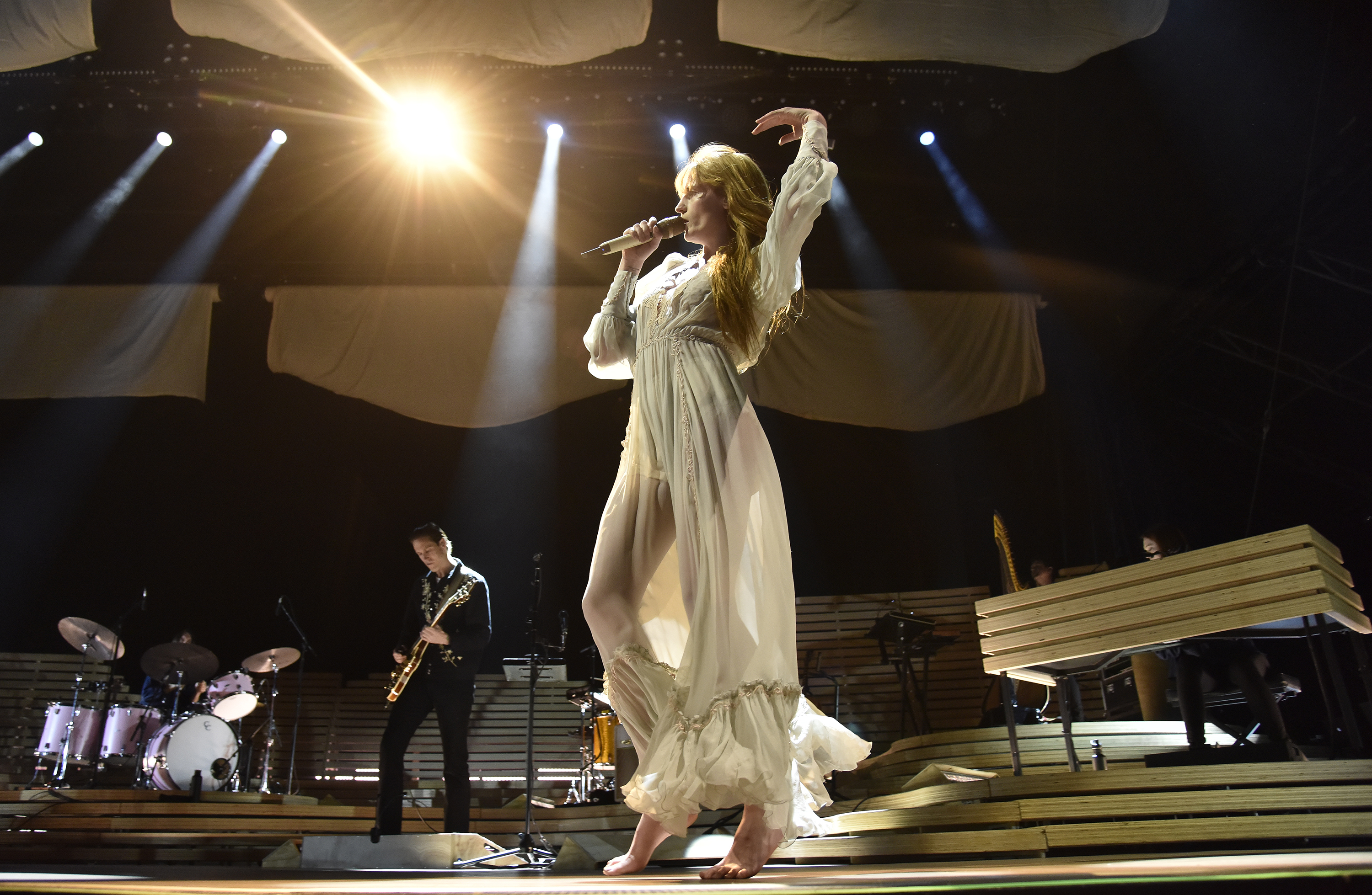 ‘Hope has to become an action, not a word’. Thus went the rallying call of Florence Welch, the ethereal and eponymous frontwoman of Florence + The Machine, during the first night of two sold-out dates at London’s O2 Arena.

Wednesday night’s concert was less of a concert than it was a religious experience. I’ve been to countless gigs at various venues across the capital, but never before have I felt such an outpouring of love in one venue – not just for the artist performing, but for each other. Having released her fourth album, High As Hope, earlier this year to great acclaim, it was very much a homecoming for Florence, who completely wooed the sold-out crowd, who hung on her every word as she danced and spun her way across the stage.

Opening for Florence was Brooklyn based band Wet, whose poetic and haunting melodies were the perfect opener for a night of haunting, angelic music. The band’s recent album was produced by John Hill, a previous collaborator of Florence’s, further underlying the creative similarities between the two artists.

The O2 was the perfect setting in which to creatively explore the High As Hope album, with the light show and creative decisions made perfecting reflecting the ethereal nature of the music itself.  Florence + The Machine opened with ‘June’, the opening track of ‘High As Hope’, and it was the perfect introduction to a night of powerful and magical music. Florence herself moved across the stage as if she was born to do so, spinning and twirling in a manner that completely entranced the audience, her sheer dress, bare feet, and flowing auburn hair more akin to a Pre-Raphaelite painting than anything of this earth. Her voice was truly something else – at times capturing the quiet beauty and melancholy of tracks such as ‘The End Of Love’, and at others, belting out powerful and emotive refrains of songs like ‘Patricia’, a song dedicated to Welch’s hero and iconic songstress, Patti Smith. Welch dedicated the song’s performance to Smith, telling the audience that she felt her spirit whenever she sang it – and the audience could certainly sense it too. When she speaks, she further entrances the audience, her shy demeanour contrasting with her theatrical dancing and bold movements – yet it only causes the audience to fall further in love with her. ‘South London Forever’ was a particular standout of the set – with Welch herself hailing from South London, the track has obvious emotional importance to her, particularly when considering the O2’s location as being in South London itself. Christening the audience the ‘South London Choir’, the entire audience was spellbound throughout the entire performance, during which vast sails of material descended from the arena roof. Welch later ran off stage and around the arena during ‘Delilah’, the storming track from previous album How Big, How Blue, How Beautiful, singing in the middle of a crowd of entranced fans – her connection to every single member of the audience was truly incredible, and during the track ‘Cosmic Love’, she encouraged the audience to shine their phone lights in lieu of stars, creating constellations around the entire arena. Every person in attendance was hooked on her every word, and every graceful, celestial movement. The crowning glory of the breathtaking show, however, was ‘Dog Days’, from the 2009 debut album, Lungs. During the track, Welch asked each member of the audience to hug a stranger, creating an overwhelming feeling of love not just for the artist that everyone had travelled to see, but also for each other – something that is so often lacking in current society. During the climactic end of the song, Welch encouraged the audience to jump as much as they could, letting out all and any negative feelings and energy, and at the end of the song, it truly did feel as if the entire audience had had a weight lifted from them. This was no less than magical, and it exemplified the spellbinding and enchanting atmosphere of the entire night – Florence, and her music, are nothing less than otherworldly.