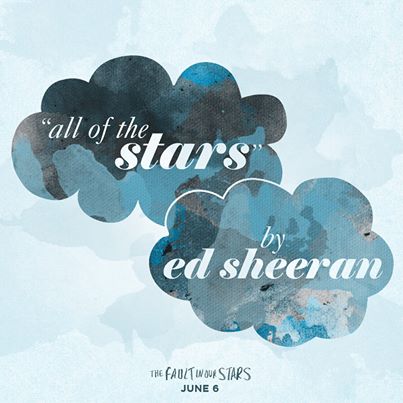 Pick of the Week | Ed Sheeran – All Of The Stars

No spoilers, I promise, but allow me if you will to drop in a reference, now and again. Okay? Okay.

So… the Fault In Our Stars soundtrack was released yesterday. The critically acclaimed book, The Fault In Our Stars by Vlogbrother and all round awesome guy, John Green will be gracing cinemas worldwide in the coming weeks and months. Now don’t get me wrong, I’m looking forward to the film, but I have been more interested to see who will feature in the soundtrack.

It is one of a plethora of aspects which makes or breaks a film. With that in mind, the levels of excitement that I felt, rose when I heard that Ed Sheeran was going to be one of a whole host of artists featured in the TFIOS movie. The artists ranging from Jake Bugg and Kodaline, to Charlie XCX and Birdy!

‘I See Fire’ is the main song that featured during the credits roll of The Hobbit: The Desolation of Smaug, and it turns out, he’ll be playing people out once more with his new song – All of the Stars. I was curious about this song the most. So, naturally, I gave it a quick listen.

I have chosen it as my pick of the week..

..because it sounds like the perfect way to close out a film like this. Based on what I know about the film (which is very little, it has to be said…), it juxtaposes what happens at the very end of the film.

It is certainly a very soothing song which I thoroughly enjoyed. I wish I had the ability to describe the song to you, but the world is not a wish granting factory. There will be that one missing adjective that would just make the description seem…incomplete.

So instead, all I will say is that I highly recommend you listen to the song!

As a little sidenote..

This time next week, two Insanity Radio presenters will be presenting live on air for 128.7 hours (5 and a half days) to raise money for Teenage Cancer Trust and Mary Francis Trust. However, this is not just an Insanity Radio event, it is going to be livestreamed by the team at rhubarbTV!

During that period, I would love it if you could support Sarah and Hitchen as they go and push themselves to boundaries that are yet unknown. More details will be coming out very soon, so check out the InsanityEvents and InsanityRadio twitter accounts, the facebook page and the website for more details.

Donations are always welcomed, but food, hugs and love for them is just as important. So please show your support to them and for them!