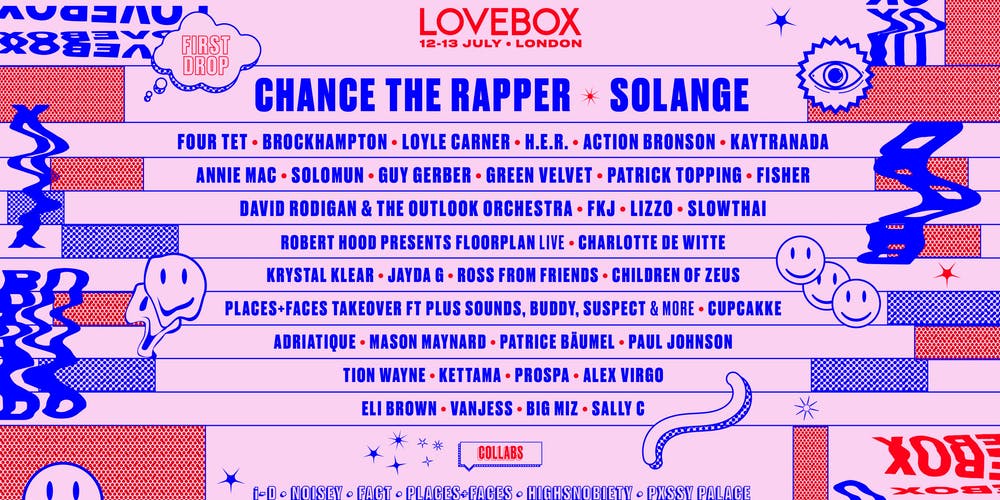 Already having withdrawal symptoms from Glastonbury and Wireless? Fear not, as Lovebox Festival is this weekend in Gunnersbury Park. Insanity Radio and Turn Up Broadcasting have teamed up and will be heading
to Lovebox to give you behind the scenes exclusives and interviews with all your favourite artists and creatives.

But we want you to join us at Lovebox this weekend so here are all the details you need to have,
including dates, travel, ticket prices and line-up, to ensure you a fabulous weekend at Lovebox festival with us!

Lovebox Festival will take place on 12th and 13th July 2019 at Gunnersbury Park, a beautiful park in West London, situated in the London Borough of Ealing, between Acton, Brentford, and Chiswick. It has previously taken place in Clapham Common and Victoria Park, but has been in Gunnersbury Park since 2019. The nearest tube stations are Acton Town (District & Piccadilly Lines / 10 mins walk) and Ealing Broadway (Central & District Lines / 25 mins walk). From there it is a 10 minute walk to the main park entrance.

The Lovebox festival headliners this year are Solange and Chance the Rapper. Solange Knowles is Beyonce’s little sister who started her career as a Destiny’s Child back-up dancer but decided to pursue a solo career at the age of 16. She is now known for her creative R&B music with an eclectic style and is sure to be bringing plenty of vibes to the Lovebox stage this weekend with tracks from her latest acclaimed album, A Seat at the Table, including her Grammy-winning song ‘Cranes in the Sky’.

Chance the Rapper is a 25 year old American rapper Chicago who has become a household name, not only for his hit music but also his charitable nature, as he is well respected for giving back to his hometown of Chicago. His most recent mixtape, Coloring Book, won 3 Grammy Awards including Best Rap Album, and was the first ever streaming-only album to win a Grammy. There’s no doubt you’ll hearing his incredible songs such as ‘No Problem’, ‘Angels’, and ‘Same Drugs’.

Other announced acts include 2 Chainz, Giggs, Cypress Hill, Four Tet, Brockhampton, Loyle Carner, H.E.R. and Action Bronson, along with the likes of J Hus, Slowthai, Lizzo, Cupcakke, and Ross From Friends – and you can check out the rest of the line up right here.

Tickets are still available on the Lovebox Festival website – we’ll see you there!